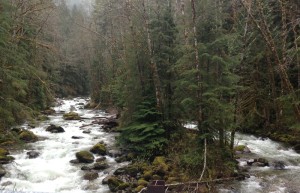 The Skykomish River’s main stem is 29 miles long. The length including its head water tributaries, South Fork Skykomish and Tye River, is 62.4 miles The Skykomish drainage basin is 834 square miles in area.

The Skykomish is sometimes referred to by the nickname “The Sky”.

The headwaters of the North Fork Skykomish River are located in the Henry M. Jackson Wilderness near Dishpan Gap along the Pacific Crest Trail. It flows as a small stream off the north slope of Skykomish Peak. The Wild Sky Wilderness protects tributaries and forests adjacent to the North Fork Skykomish, although not the river itself. The river flows generally in a southwestern direction from its source to its mouth. Just before picking up Goblin Creek, the river flows through a short but impressive canyon and within that canyon the river drops over Deer Falls. A short ways down from that, the river flows through an even shorter but very twisted and interestingly shaped canyon at Bear Creek Falls.

The Skykomish River provides natural spawning habitat for fish. The runs include;

Skykomish River fishing can be done by walk in, drift boat and river sleds.  The WDFW fishing regulations can change dramatically, depending on which part of the river you are fishing.  Our guide staff is fully up to date on the regulations for the sections of the river we fish.

The Skykomish is a great conventional gear and fly fishing river.  It is best known for its steelhead fishing. The river opens June 1st to a mixture of late wild winter steelhead, early hatchery summer runs and summer Chinook Salmon.   Summer run steelhead and Chinook Salmon fishing continues throughout the summer.  In mid to late late fall heavy rains bring the river back up to winter time flows.

In the fall, Coho Salmon and Pink Salmon (in odd years) crowd the river.  Chum Salmon arrive sometime in November with numbers building to a peak around Thanksgiving.  The river is closed to fishing in March, April and May to protect the fragile run of native winter steelhead that spawn during this time.